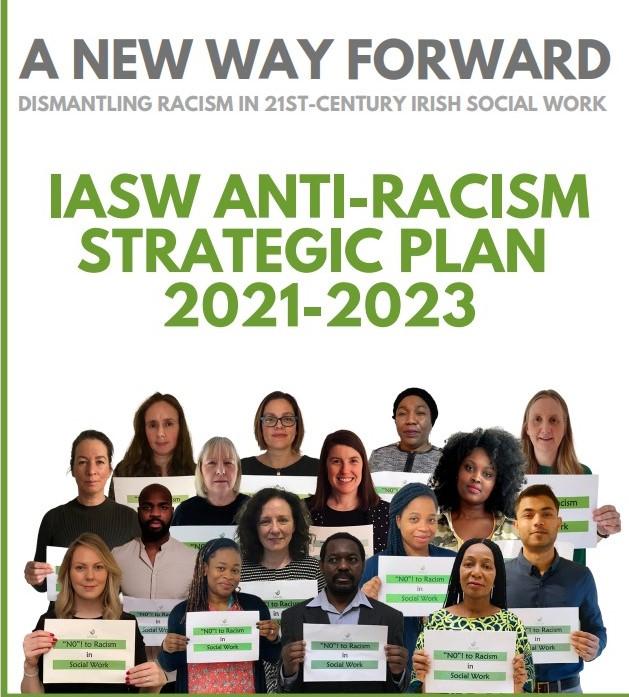 Senator Eileen Flynn today launches the first Social Work Anti-Racism Strategic Plan for the Irish Association of Social Workers (IASW). During the launch today, the IASW calls for the immediate enactment of Hate Crime Legislation.  The IASW Anti-Racism Strategy is in line with the Government’s efforts to introduce Hate-Crime Legislation.  IASW works as a member of the Irish Network Against Racism (INAR). Through this partnership and through the work of the Anti-Racism Committee IASW is fully aware and informed of efforts at government level to introduce this much needed hate crime legislation.

“This is a really important step for the IASW to acknowledge the deep systemic issues in our society that have become more visible as Ireland has welcomed people from other countries, cultures, and ethnic minorities to live and work here. The journey to develop the social work anti -racism strategic plan was inspired by the killing of George Floyd in the USA”.

Dr Colletta Dalikeni Co-ordinator of the Anti-Racism Advisory Group within the IASW said:

“We do not need to look as far afield as the USA to find racism because our own society is plagued with the rise in hate speech, hate crime, and the persistent rise of the far right.  She added that the Anti-Racism Strategic Plan was therefore not just a statement of intent but a road map of how the IASW aims to dismantle racism within the field of social work and in society as a whole”.

One of the invited speakers at the launch Claudia Hoareau Vice-Chair of the Irish Network Against Racism (INAR), said:

“The strategy which was directed by social workers with lived experience of racism supported by their White ally colleagues, is a welcome step in the right direction by the IASW as it specifically aims to address racism within the Irish context. Broadly speaking, much of what our society has been consuming about anti-racism has either been American or British centric, the strategy’s context specific focus on issues relating to social work as a product of Racialised Irish society will facilitate the required changes within the profession and in society.  By virtue of their profession, Social Workers, are well placed to advocate for changes in unjust policies and practices that perpetuate racism”.

Recognising the continuing rise in racist incidences, in our communities, as well as the great disparities caused by racial inequalities, social work, a profession grounded on principles of Social Justice and Human Rights will continue to lobby and campaign for the introduction of Hate Crime Legislation and a National Action Plan Against Racism to ensure effective legal protections for ethnic minorities and other groups from the considerable harm caused by these crimes.  Taking action against Racism is the only way to combat  the “scourge” because racism diminishes the dignity and well-being of members of our society - victims and perpetrators alike.  In the words of the Social Justice icon Nelson Mandela:

“No one is born hating another person because of the colour of his skin, or his background, or his religion. People must learn to hate, and if they can learn to hate, they can be taught to love, for love comes more naturally to the human heart than its opposite”.